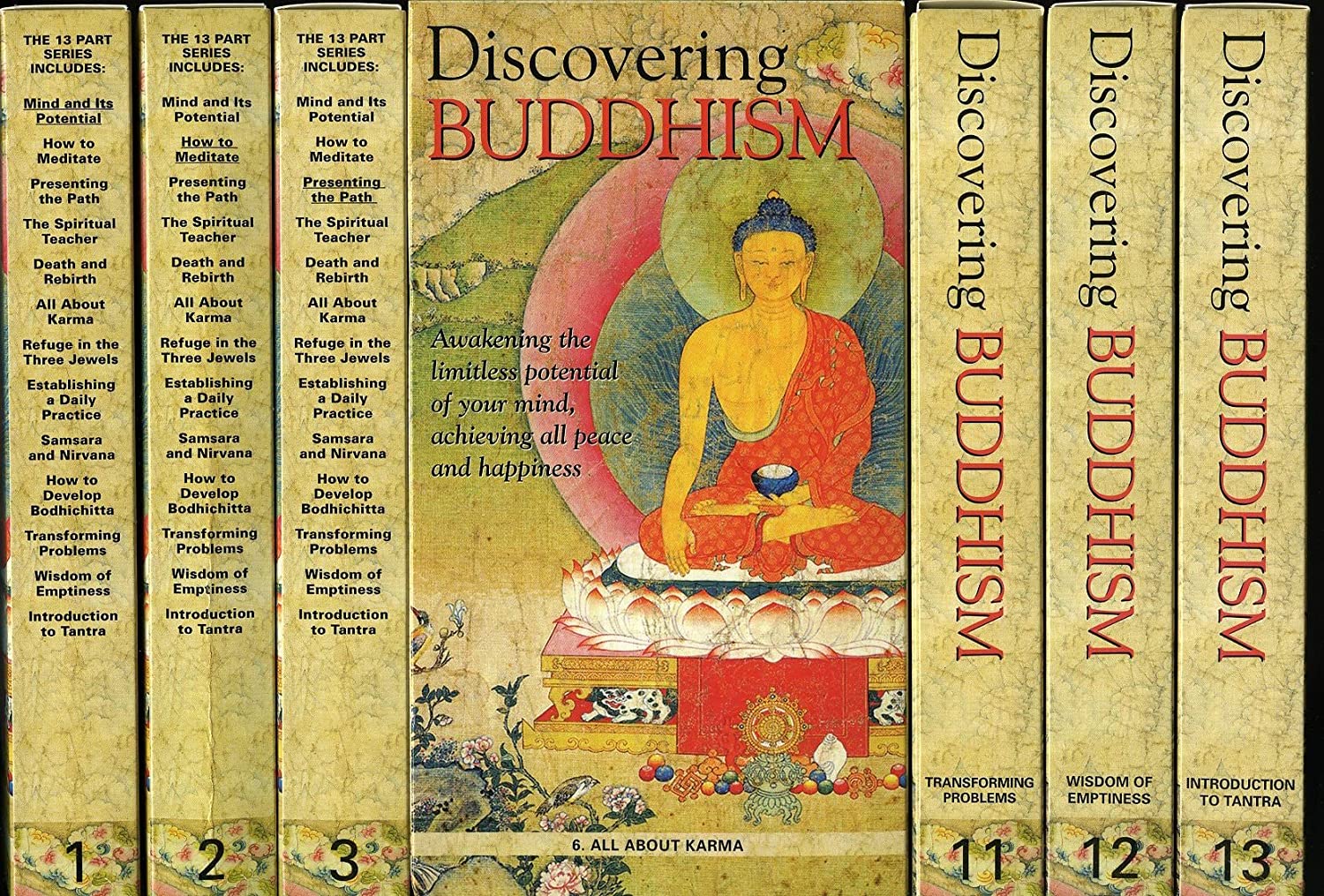 Over 2,500 years ago, Shakyamuni Buddha gained direct insight into the nature of reality; perfected the qualities of wisdom, compassion, and power; and then revealed the path to enlightenment to his disciples. In the 11th century, Atisha Dipamkara, an Indian master who was very influential in Tibet, organized the Buddha’s extensive teachings in the form of a graduated path to enlightenment (lamrim) to clarify how an individual practitioner should best put them into practice.

The lamrim tradition was further systematized and elaborated upon by many holy beings of Tibet, including the great philosopher and practitioner Lama Tsongkhapa, and these teachings have continued to be passed from teacher to student up to this present day. Thus, when Lama Thubten Yeshe and Lama Zopa Rinpoche began to transmit these teachings to their disciples in the 1970s, they came from a deeply experiential tradition of study and practice. This tradition is the core of Discovering Buddhism, a fourteen-module program that gives students a solid foundation in the teachings and practice of Tibetan Mahayana Buddhism.

1. Mind and Its Potential

Examine the mind and how it creates happiness and suffering. Learn to transform destructive thoughts and attitudes to develop a positive and joyous mind.

Examine the mind and how it creates happiness and suffering. Learn to transform destructive thoughts and attitudes to develop a positive and joyous mind.

Get an overview of the entire Tibetan Buddhist path to awakening. Study the life story of the Buddha and discover a unique system for putting Buddhist philosophy into practice – the lam rim, or graduated path to enlightenment.

Investigate the role of the teacher on the spiritual path: the need for a teacher, the qualities of teacher and student, and how to relate to a teacher.

Explore the process of death and rebirth and its impact on how we live our lives. Learn to fulfil your purpose in life, resolve conflicts, and develop the skills to help yourself and others at death.

Learn the essential facts about the law of actions and their results. Explore ways to deal with life more effectively and take control of your future.

7. Refuge in the Three Jewels

Find out what it means to take refuge in the Three Jewels – the Buddha, Dharma, and Sangha – and the essential practices of refuge. Learn about the advantage of taking lay vows and their role in enhancing our spiritual growth.

Assemble the tools you need to develop a successful daily practice and find out the elements necessary to generate realizations. Get some tips for making every action you do meaningful.

Investigate what “samsara” is and how we are stuck in it. Find out what “nirvana” is and how to achieve it. Learn how to be free from suffering and gain practical tools to deal with and eliminate disturbing emotions forever.

Discover practices that develop our innate qualities of compassion. Learn to apply these techniques to generate bodhichitta, the mind of enlightenment, known as the very heart of Buddha’s teachings.

Learn the disadvantages of selfishness and the advantages of cherishing others. Learn to employ the special techniques of mind training (lojong) to transform problems into happiness.

Learn how to develop calm abiding (shamatha), the ability to remain focused in meditation for as long periods as you want without distraction. Try different ways of meditating on emptiness, the lack of true existence of the self and all phenomena, the realization of which is crucial for the attainment of liberation and enlightenment.

Learn what tantra is, how it works, and why it is a powerful form of practice. Get a broad overview of the four classes of tantra and learn to practice simple kriya tantric methods. Learn how to integrate tantra with lamrim meditation to obtain the best results.

Undertaking intensive practices of purification, a ten-day lamrim course/retreat, and three Nyung Nä retreats creates the inner conditions needed to gain the realizations of the path to enlightenment. The purification practices entail 100,000 prostrations to the Thirty-Five Buddhas and 100,000 long Vajrasattva mantras (two of the nine traditional preliminary practices). The ten-day lamrim course/retreat can be done on one’s own or at some FPMT centers, including Kopan Monastery in Nepal. A Nyung Nä is a two-day fasting practice related to the buddha of compassion. It can be done at many FPMT centers, especially during the month of Saka Dawa, which falls in May-June. This module can be started at any time in the program but is best started early on, such as after the module All About Karma, as it takes some time to complete.

Alan Marsh has been a student of Lama Zopa Rinpoche and member of Vajrayana Institute since it began in the early 1980’s, under the directorship of Ven. Roger Kunsang. During his long association with VI, he’s occupied various positions on the management committee and was a member of the board of FPMTA for several years.

I want to donate for this class

I've already made a donation

I don't wish to donate at this time